So there I was, just minding my own business when, out of the corner of my eye, I saw something plummet from ceiling to the ground. And it hit with a loud "thwack". Looking for the source of the noise, I saw a rather large centipede scurrying across the carpet. It had actually landed on a magazine, so the noise was louder than if it had landed on the carpet. I was happy to see it was not as large as one would expect from the sound. Needless to say, it is dead now.

Tentatively identified as a thin-legged wolf spider. I've noticed that spider colors seem to vary greatly in their internet ID pics. Not sure if that's natural variation, or just that it's hard to get good lighting on candid photos of spiders. My spider was definitely darker and 100% monochromatic, and the pics on the internet show them shaded with brown.

Not all bugs, but this one was! George the Cat was doing that cat thing where they smack at something and then sorta jump back and recoil, and then whop it again. And then staring very intently. Repeat several times. I got up to see what it was and it was a variety of centipede I had not seen before. Indeed, I was unaware something so ugly existed outside of horror films and tropical jungles.

Why do we have about 10 robins huddling in the fenced in section of the yard? Don't they migrate south anymore?

I think I've been hearing loons for the past couple of nights. We are less than a quarter mile from the Delaware River, but I thought they were more of a lake-dwelling critter. It's also possible that I am hearing very faint turkey-calls (we do have wild turkeys in the area) but it's not exactly the same.

It's a little startling, kind of like the stereotypical laughter of a movie lunatic, but higher-pitched. I keep flashing on the scene from Jane Eyre when the wife runs about the battlements late at night. 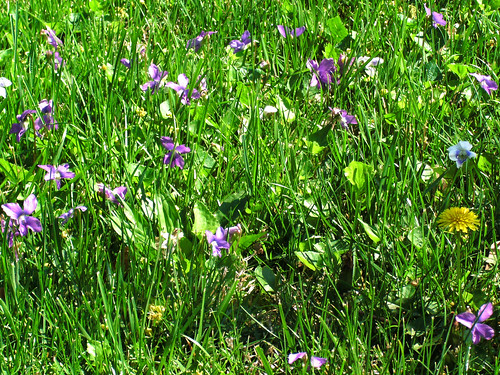 Every spring there is a brief moment in which the violets all seem to bloom at once and the grass has not gotten long enough to require mowing. Was it "Room with a View" or "Howard's End" that had the scene were our distraught protagonist strides moodily through the glades of bluebells? Our back yard had about three days that were like a non-brooding version of that.

Also on the nature front, the resident woodchuck no longer resides in our yard. Last year a tree fell down in the alley and when it was cleared away, the brush that had been choking the alley was also cleared. I think the woodchuck's main residence was under the roots of that tree. He stuck around for the rest of the summer but seems to have moved to somewhere more hospitable last fall.

On the way to fabric shopping with a customer, encountered a flock of wild turkeys strutting in the middle of the road. There were 6 or 7 males with their feathers all puffed up and their tails spread and maybe 20 or 25 females seeming to ignore them. I have seen them quite frequently, but never before in the midst of their courtship behavior which is referred to as "strutting". Normally they just mill around, and when the mood strikes them they stalk about like miniature velociraptors. But when strutting for display they stand straight up to a height of 3 to 4 feet tall and puff up till they are a good 3 feet in diameter. In the sun, they were strikingly handsome with dark chocolate/chestnut brown feathers shimmering with a greenish bronze iridescence.

We live in a strange little area in between the highway and train tracks and the river. It's an odd patchwork of truck gardens, light industry and elegant Victorian homes not that far away from the turn of the century developments where the factory workers lived. When you take this mixed kind of land usage and add the New Jersey swamps and creeks that have never been developed we get all kinds of wildlife. Just last fall I saw a 6 point buck running along the causeway beside the train tracks. He seemed to have no more idea than I regarding how he got there.

We have groundhogs in the back yard and wild turkeys visit occasionally, startling one quite a bit when they shriek like lunatics just outside the window at 3 AM. Somebody nearby keeps a flock of peacocks and one of the other neighbors informs me that her hens won't lay when the peacocks are annoying them. Someone has a couple emus and a llama down by the train station and in another field near the highway is a collection of horses, ponies, llamas and goats. Imagine my surprise when I noticed one of the horses has black stripes on a brown background darkening to a black face and feet.

According to what I can find on the internet this is probably a zorse... a zebra/horse hybrid. Picture is from internet, similar to one I saw. What will they think of next!
Collapse